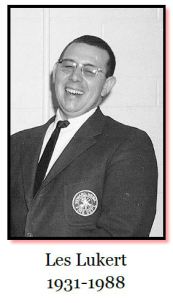 Les Lukert was the Past President and a longtime member of the Nebraska Society of Fire Service Instructors. Les was an individual dedicated to the training and education of firefighters. He broadened their knowledge and skills and demonstrated to them the importance of preparing today for tomorrows emergencies.

Les was elected to the Seward Volunteer Fire Department on January 6, 1954. He was appointed fire chief in the early 1960’s. When he began teaching for the Nebraska State Fire Marshal Training Division in 1967, he relocated to Oshkosh and transferred to the Reserves with SVFD. He returned to active status with Seward in November 1974 and retired to the Reserves again in 1982. He was also a member of the Oshkosh Volunteer Fire Department. As it says on the NSFSI Memorial Plaque: “Let those who pass after him be recognized for their contributions to the educational process and the ultimate goal for all firefighters – To Save Lives.”

Register for the 2023 Conference Now!